Gemstone of the Month 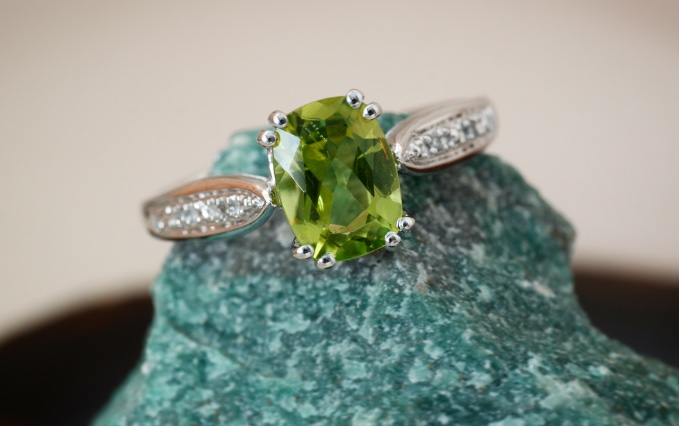 Peridot is widely recognized for its brilliant lime green colour. This green colour comes from the composition of the minerals itself, rather than from trace impurities like other gems. As a result of this, peridot is one of the few gemstones that come in only one colour. However, the shades of the stone can vary from yellowish-green to olive to brownish-green, depending on how much iron is present.

Although the origin of the name is unclear, most believe peridot is derived from Arabic Faridat, meaning “gem”. Others think that it is rooted from the Greek word Peridona, which means “giving plenty”.

Peridot is a gem variety of the mineral olivine, which forms deep inside Earth’s mantle and is brought up to the surface by volcanoes. In Hawaii, the gem symbolizes the tears of Pele, the volcano goddess of fire who controls the flow of lava.

In some rare circumstances, peridot can be found in meteorites. However, most of the peridot supply comes from the San Carlos reservation in Arizona. Other resources include China, Myanmar, Pakistan, and Africa.

Peridot measures a 6.5-7 on the Mohs scale. So, the raw crystals are prone to cracking during cutting, but the finished gemstones are fairly robust and easy to wear.

Peridot is also known as “The Evening Emerald” because its sparkling green hue looks brilliant at any time of day. It is also said that the gem possesses healing properties which protect against nightmares and evil and ensures happiness and peace.

The ancient Egyptians called peridot the “Gem of the Sun”, believing it protected the wearer from terrors of the night. Egyptian priests believed that it harnessed the power of nature, and used goblets encrusted with the gemstone to commune with the gods.

Some historians believe Cleopatra’s famous emerald collection may have actually been peridot. The two gems were continuously confused with one another throughout the medieval times. The 200-carat gems adorning one of the shrines in Germany’s Cologne Cathedral were long believed to be emeralds as well, but were actually peridots.

The Pakistan peridot deposits founded in the 1990s produced some of the finest peridot gemstones ever found.

Not only is peridot the birthstone for the month of August, but it is also the 1st and 16th wedding anniversary gemstone